The MCAT Basics Podcast with Sam Smith of MedSchoolCoach covers many topics on the AAMC MCAT. Each podcast covers a different topic, and up to 3 of the 4 MCAT sections. Lesson topics are based on the practice material, including practice tests, question banks.

How do you determine the rate of reaction? Well, what you actually want is the initial rate of reaction, when you’ve just combined the enzyme and substrate and the enzyme is catalyzing the reaction as fast as it can at that particular substrate concentration (because the reaction rate will eventually slow to zero as the substrate is used up). So, you would measure the amount of product made per unit time right at the beginning of the reaction, when the product concentration is increasing linearly. This value, the amount of product produced per unit time at the start of the reaction, is called the initial velocity. Enzyme inhibitors can also irreversibly inactivate enzymes, usually by covalently modifying active site residues. These reactions, which may be called suicide substrates, follow exponential decay functions and are usually saturable. Below saturation, they follow first order kinetics with respect to inhibitor.

Many enzymes act similarly to the hypothetical enzyme in the example above, producing parabolic curves when the reaction rate is graphed as a function of substrate concentration. Enzymes that display this behavior can often be described by an equation relating substrate concentration, initial velocity, known as the Michaelis-Menten equation. Enzymes whose kinetics obey this equation are called Michaelis-Menten enzymes. Michaelis-Menten enzymes are different from allosteric enzymes (discussed in the main article on enzyme regulation). Allosteric enzymes typically have multiple active sites and often display cooperativity, meaning that the binding of a substrate at one active site increases the ability of the other active sites to bind and process substrates.

“Most of these restriction enzymes cut at palindromic sequences. These are sequences that are read forwards and backwards at the same thing. If you take one strand, you flip it around it should match that top strand. I’m sure you’ve seen the tattoos that are palindromic. For instance, one of my buddies has a palindromic tattoo on his forearm. And so it says his last name. If you’re looking straight at him and he has his forearm, you know, in a normal human position, it reads his last name. And if he was to flip his form around and have his hand, you know, pointing outside, away from his body, it says the exact same thing. It looks at the exact same way. So that’s a palindrome. “ 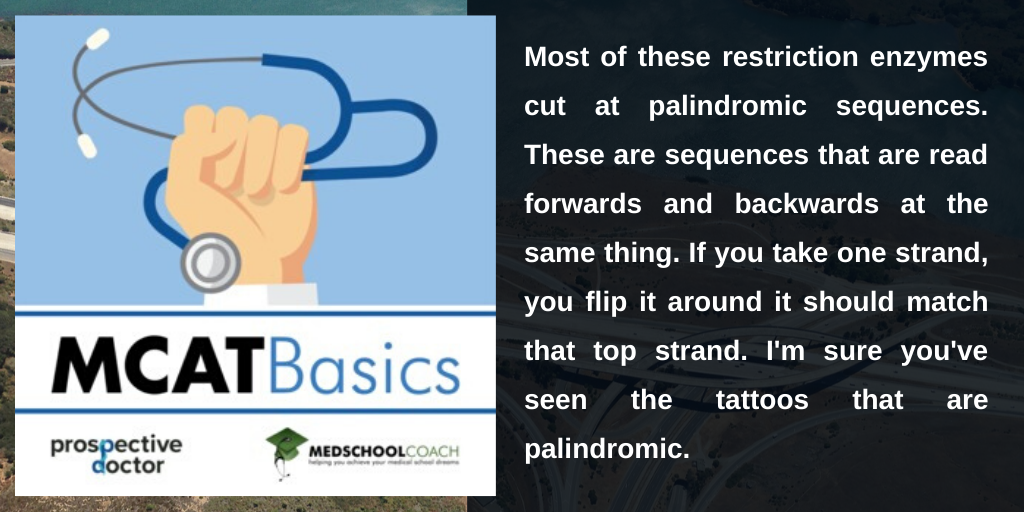